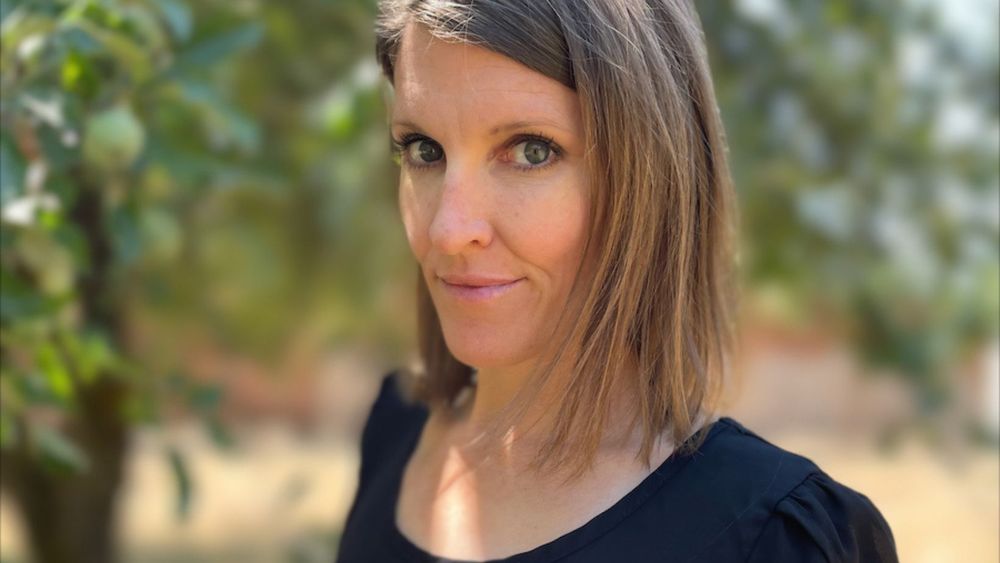 A. E. Copenhaver: Writing to change the world

As the vegan movement grows, so do the many ways to advocate a vegan way of life. An approach that is gaining widespread media attention and making headlines, is literature as a form of activism and advocacy. From non-fiction Best Sellers like This Is Vegan Propaganda to fiction best sellers such as the Earthlings trilogy, vegan stories are proving to be a great way to have a lasting impact on readers' lives. For International Literacy Day we sat down with A. E. Copenhaver to discuss her award-winning eco fiction novel with an endearing vegan protagonist; My Days of Dark Green Euphoria (MDODGE).

This brilliantly crafted novel tells the story of thirty-something Cara Foster as she navigates a severe case of compassion fatigue and eco-anxiety by living as eco-aware as possible. Cara longs for a carbon footprint so light you'd hardly know she exists, until she meets her boyfriend's alluring mother Millie, and is equally horrified and mesmerised by her extravagant lifestyle. Cara is left unwittingly struggling with the desire to live as obliviously guilt-free as the intoxicating older woman, or continue down her path of conscious living. Cara’s story is a relatable tale of trying to find balance in an unbalanced world, in the hope of living in harmony with our planet, instead of tipping the scales towards environmental catastrophe. Poignant, fast-paced, witty and evocative, we couldn't wait to find out the inside story behind My Days of Dark Green Euphoria.

V Land UK (V-L): We absolutely loved reading MDODGE and something we all agreed on, was that we found the protagonist Cara to be so relatable. She genuinely sees the world for what it is, with so many ways of life that could be improved for people, animals and the planet as a whole, if we only took the time to see. How did you create such a complex character?

A. E. Copenhaver (AC): I’m so pleased you enjoyed Cara’s story. She came into being from having lived that same experience; to start out as a vegan looking at the world and feeling angry, outraged even, that people are seemingly contributing towards so much suffering without even caring. I’ve previously had conversations with people that damaged relationships, because I couldn't contain my anger. I was so furious and accusatory with them, and then I’d have to go back and repair that relationship and apologise, and then retool the way I speak in my everyday life. My own experience now is totally different to how I would write a character who is struggling with something like this, but Cara became a reality from that.

V-L: One of the most intriguing aspects of Cara is her thought process. Her monologue is almost educational with the vast knowledge she has of how things are made and their environmental impact. It’s such an effective way of creating advocacy.

AC: I can't get enough of the writing and videos about effective vegan advocacy, animal advocacy, communication and strategic framing. I really got into this when I started studying strategic framing for climate communications. I became certified as a climate interpreter in 2015/16 in my previous job, and that changed my whole worldview. It changed the way I communicated about controversial and complex topics that people tend to want to distance themselves from.

It’s really hard to do but there is a formula. I'm not saying that I have it, but there is one that we can practise and implement. It’s interesting that in my professional life I take that really seriously but in my book, Cara’s monologue is so steely-eyed and judgemental, she’s so enraged and disgusted with people and their behaviours and the decisions that they make. Which admittedly has turned away some readers, but perhaps that’s because they feel judged whilst reading.

V-L: Were there particular aspects that you were keen to raise awareness of?

AC: I have a special interest in the atrocities that happen in the ocean and that comes from working in ocean conservation for seven years. In the chapter where Cara is at brunch listening to the two women that are talking about protein and ‘sustainable fishing’, I wanted to bring to light that such a thing doesn’t exist. And even if people can make a sustainable case for some practices, there’s still the ethical component that comes through for Cara, and for a lot of vegans.

V-L: That brings us nicely to our favourite character - Charlie. Everyone has that friend or work colleague that likes to shop ‘sustainably’ and share all the ‘eco’ things they buy whilst turning a blind eye to veganism and consumerism. Charlie is that person.

AC:  I love hearing that! According to Cara, Charlie is just the worst and she can’t stand her, so it’s really fun to hear that “Charlie’s my favourite” from so many readers.

V-L: The opening scene of the book is one many vegans can probably relate to as well. Witnessing a friend/relative or partner killing an insect. What prompted you to start MDODGE with the spider incident?

AC: The spider moment was really to set the stage to show readers that Cara looks at the world in a really different way. And if we were to expand our circle of comparison, and our understanding of what a life is, and what a life counts as, we might end up with someone like Cara. A person who looks at a spider and sees someone as having a life, rather than a pest that needs to be dispatched or taken away. If that scene sets up Cara’s worldview, what else does she see when she looks at the world? She sees more than the common consequences of capitalist society, and views things as unexceptable atrocities and abuse.

V-L: Did you feel you needed to add humour to make the story relatable to people that don’t have this mindset?

AC: That’s such an interesting question as what I’ve found so far, is that the readers that aren’t already some form of Cara, or had experiences like Cara, or aren’t already vegans; to them, they don’t think it’s funny. At all. To them it’s preachy. It’s offensive. It’s gross. Yet to readers that are environmentally conscious or vegan, they think it’s hilarious. They can see the humour in how Cara sets up all these various experiences that she has and the way she talks about things. My aunts actually said to me, “It's very well written but you’re going to make so many people uncomfortable with how rigid Cara is with her view of the world.”

Then I had to point out some of the moments that are meant to be humorous, for example when Cara is self-flagellating with an organic loofah and an angry bar of oatmeal soap. I don’t know how anyone can read that and think it’s serious, there are many parts where it’s clear I’m being satirical.

V-L: The ‘dumpster diving’ stood out for us too, when Cara chose to eat discarded food that was in her local store bins to lessen food waste. Was that with humour in mind too?

AC: It ends up being funny because it’s not considered usual for someone to go dumpster diving but I wanted to raise awareness of food wastage and the greenhouse gas emissions associated with food waste. There are over a billion people dying of malnutrition and starvation across the globe whilst we’re throwing away food because we can’t distribute it properly. To think that one little person in San Francisco, California is going to try and make a difference is almost an insane thing to do, but it’s true. If more people participated or said “this is unacceptable,” then we’d have no choice but to change the system.

V-L: What message do you hope readers take from MDODGE?

AC: I definitely hope that readers engage with it as a novel and for Cara’s character to be questioned and analysed. I think I’m most disheartened when people say “I felt judged so I couldn't read it”. If we interrogate Cara’s character, what would we come up with? Why is she acting the way she is? What is inspiring her behaviour? All those answers are in the book. I think that’s why I wrote it. To show that we might not like what this character says but that it’s important, and still very much worth listening to. And if we don’t like what she’s saying then why don’t we like it? And what does that say about us?

It’s not meant to be judgemental. Cara is a character in a book. She can't reach into readers' lives and tell them what to do. She can make people feel uncomfortable, sure, but we encounter so many uncomfortable things everyday and we don't feel judged by those headlines. Yet when we get a character like Cara, someone that feels the emotional and psychological burdens that we’re contributing to and is taking all of that on board, what does that mean, if in turn we say, we’re not ready to take that on too?

I hope there’s an interrogation of this character and possibly a deeper understanding of where we are in our own lives at the same time as a result.

V-L: What has the publishing process as a vegan eco writer been like for you?

AC: Ashland Creek Press have been phenomenal to work with, Midge Raymond and John Yunker are just lovely people and they've been incredible publishers so I feel totally privileged and thrilled to have been able to work with them.

V-L: Are there any tips or advice you’d like to give any budding writers?

AC: My primary piece of advice would be; if you are somebody that has a desire to tell a specific story - that desire is probably never going to go away. So it's really just a matter of deciding when you’ll bring it forth, and when to bring it into the world. I think if you are somebody with that desire, you should probably do it sooner rather than later, and to start investing some time into looking how you can bring it into being.

I spent many years dampening my own desire to write fiction. I was happy doing editorial approaches but that little spark that told me to write stories never went away. I only picked up that story and wrote it when it became more painful not to write it. Once the idea for MDODGE was fully crystallised in my mind, I knew I had this obligation to finally bring it forth, even though I didn't know what it was going to look like.

Whatever mode or medium or artistic channel you may be drawn to, do your best to figure it out and go for it. I’m so impressed with human creativity and ingenuity, and I think if we can harvest that in symbiotic ways to make ourselves work with the planet on a massive scale, it could be paradise.

What a paradise that could be - we are firm believers that books can change the world. We don’t want to say goodbye to Cara and hope you bring her back for a sequel! Thanks for chatting with us and happy International Literacy Day. Looking for more page-turning vegan literature? Check out the greening of literature.