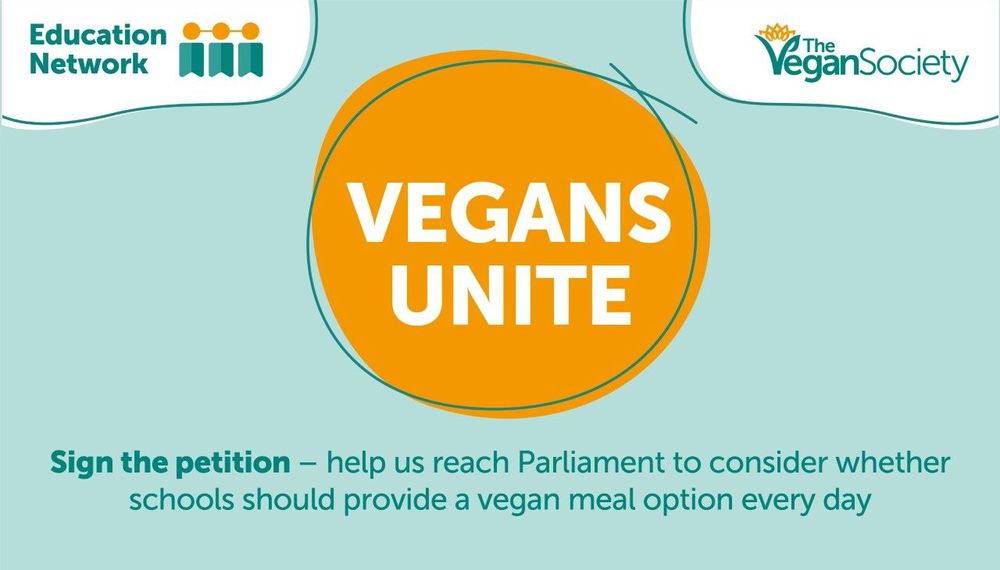 We discuss the Vegans Unite campaign with The Vegan Society

For parents raising a vegan family, it is an unfortunate reality that our children may face additional challenges throughout their younger years. From worries about fitting in, pressure from peers, and struggling with conflicting parallels, life as a young vegan will require lots of support from family, friends and caregivers.

One area of support that The Vegan Society is trying to establish is for children and adolescents at school. It may come as a shock to learn, but unfortunately, many schools throughout the nation do not cater to vegan children and teens, with many schools not yet providing a vegan-friendly option on the school meals menu.

We caught up with Laura Chepner, Education Officer at The Vegan Society and Chair of The Vegan Society’s Education Network, to find out more about their innovative Vegans Unite campaign, petitioning the government for all UK schools to provide at least one vegan school meals option.

V-Land UK (V-L): Hi Laura, thank you for chatting with us today. What inspired you to work for The Vegan Society?

The Vegan Society (VS): Prior to working at The Vegan Society, I was the UK’s first vegan inclusion education consultant working under the pseudonym, Primary Veducation and author of Veducated! An Educator’s Guide for Vegan-Inclusive Teaching, I’m also a mother to two vegan girls. Vegan inclusion is both my passion and my profession, and I am super excited to share the Vegans Unite campaign with V-Land readers.

V-L: We’re thrilled The Vegan Society is running this campaign, many of our team are parents and struggling with this very issue. Can you tell our readers more about the campaign?

VS: My daughter was refused vegan food on her first day of school, based on the grounds that veganism was a ‘lifestyle choice’ and not a religion. What many schools and caterers fail to recognise, is that under equality law ‘Religion and/or belief’ are the same categories, and veganism falls under that protected characteristic as an ethical belief. On that premise, I was able to win the case for my daughter to be served a hot, vegan meal each day, but it was heartbreaking.

Off the back of that experience, I have been working with vegan families every day, supporting them with the indirect discrimination that comes with the refusal to serve students vegan food at school. What I have found and is quite profound, is the regret that schools feel after they learn what ethical veganism is, how they have failed in their public sector duty and how easy it is to implement a plant-based option.

In every instance the vegan student feels alienated, the vegan parents/guardians feel discriminated against and the schools feel remorseful and overwhelmed. All parties have such raw emotions that could easily be avoided if the Government would implement that there should be a nutritious, plant-based option on every school meals menu.

The contradiction of knowing that human rights provisions apply to veganism, ,but then on the other hand, having no statutory vegan options in public sector institutions is unfathomable. It is no wonder that schools say ‘no’ if they are not legally bound to. The Government puts the onus back onto the parents/guardians, the schools, and canteen staff without any support, and that is simply not fair.

That is why we launched ‘Vegans Unite’ along with the Vegan Society’s Education Network, of which I am chair. The Vegan Society has been campaigning for plant-based options on public sector menus with their Catering for Everyone campaign and this drive is a focus specifically on the education sector.

V-L: What are the biggest challenges the campaign faces?

VS: The end date is August 17th and we still require 75k signatures. We have been reaching out to vegan celebrities and influencers but we can’t quite seem to get anyone with a large enough following to back the petition. We know this works as we had a surge in signatures after Kerry McCarthy MP and Caroline Lucas MP both shared, but we have a long way to go. Luckily the creator of this petition, Aaron Browning, does the rounds on social media with hilarious meme posts, but it is not enough, and we would love to reach the target so that this topic can be discussed in Parliament.

V-L: What other possibilities do you think lie ahead for veganism within schools?

VS: Vegan-inclusive education is slowly becoming recognised as our community grows. As discussions about the environment are taking priority on the curriculum, that is currently the best opportunity for a ‘way in’. However, there is still a long way to go.

We are working on it and seeing the wider societal changes that are happening in vegan marketing with plant-based investing, and the creation of child-led resources such as the Vivi the Supervegan book series. I am confident that positive change is on the horizon. There is simply a lack of understanding of what it means to be an ethical vegan and what protections we have. That is why I am excited to be in this position as the Education Officer and offer CPD accredited training to help fill those gaps and support both vegan families and schools with their vegan-inclusive transitions.

V-L: Are there any other campaigns that The Vegan Society is planning to launch?

VS: Excitingly, we are holding our first Vegan Inclusion Education Conference on October 1st. There are more details about that on the Education page of The Vegan Society Website.

V-L How can our readers get involved?

VS: It would be amazing to see V-Land readers sign and share the petition. Importantly too, if they could tag their favourite vegan celebrities, vegan businesses and vegan influencers or write to them personally about this petition, this would make an enormous difference. The more they see it the more obliged they may feel to spread the word. The campaign is called ‘Vegans unite!’ because it is we vegans who can make this difference for generations of vegan children to come.

If we don’t care enough to mobilise, then who will? We will! The V-Land team will be signing the Vegans Unite petition and sharing far and wide. If any readers are struggling with vegan parenting, check out what we feed our children’s minds for a helping hand on raising a vegan family.